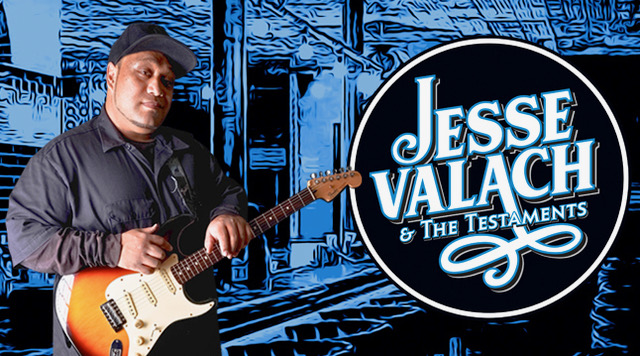 Jesse first made a name for himself honing his craft at local Blues jams and after being selected to perform on the “Unearthed” Stages at both The Wangaratta Jazz and Blues Festival, and the Echuca Winter Blues Festival. Years later, mastering the art of weaving together intense guitar and soulful vocals, Jesse takes you on a journey from lights-down-low soul ballads, to energetic shuffle romps delivered in demanding fashion. Jesse has gone on to perform as an in-demand, crowd-pleasing headliner in his own right, and appeared alongside some of Australia’s biggest names in Blues music including Russell Morris, Geoff Achison, Jeff Lang, Lloyd Spiegel, Jimi Hocking, Chris Wilson and Ray Beadle.

With dedication, hard work, devotion, and a killer rhythm section collectively formally known as “Blues Mountain”, Jesse Valach & The Testaments produce a tight, riveting live show. The debut album with Blues Mountain came in at #3 on the Australian Blues and Roots radio airplay charts, and Jesse’s second release ‘Separation Street’ also enjoyed extensive radio airplay hitting the #2 spot and receiving a nomination for Best Blues Album of 2015 at The Age Victorian Music Awards. Performing close to 200 shows a year including festivals such as Thredbo Blues, Wangaratta Jazz & Blues, Blues on Broadbeach, Australian Blues Music Festival, and Queenscliff Music Festival, Jesse is not one to sit idle. With jam-packed album launches under his belt and very successful overseas tours in New Zealand and Fiji, Jesse also holds the prestigious honour of being the MBAS Melbourne Blues Performer of the Year 2016 where he represented Australia at the International Blues Challenge in Memphis Tennessee. Now with a newly renamed outfit “The Testaments” and their new single “Testify” released in Feb 2019, Jesse has proven that from local Blues jams to the international stage, he is indeed a musician on the rise.

“… much like his Blues inspirations before him, such as Robert Cray and Stevie Ray Vaughn, he has a distinct style that is both infectious to watch and instantly recognisable when you hear it.” – Tex Miller (Forte Magazine)

FREE entry, but if you’d like to reserve a table spot, please visit the MBAS website to book: https://www.mbas.org.au/house-of-blues-09-04-2019