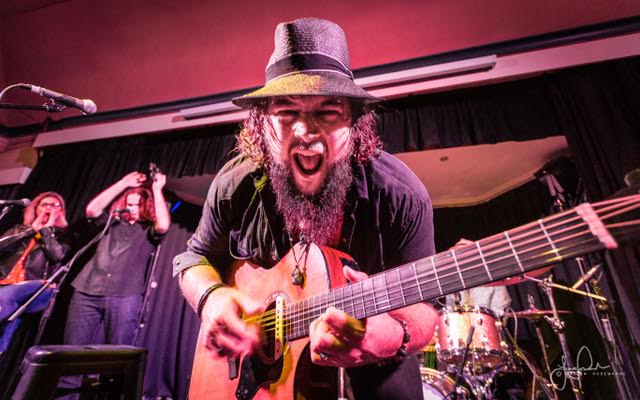 This Tuesday at MBAS ‘HOUSE OF BLUES’ @ FLEMINGTON BOWLS CLUB the feature act of the week is the MIKE ELRINGTON.

MIKE ELRINGTON is a gifted singer songwriter with incredible guitar skills. Standing at almost two metres tall, delivering his signature, gut-wrenching vocals like an instrument all on its own, very few people forget a performance from this man. The commitment to his live shows and the well-earned reputation for leaving nothing behind but sweat has seen him invited to perform at some of Australia’s finest festivals, including the iconic Byron Bay BluesFest, Bendigo, Sydney Blues and Roots Festivals and Blues on Broadbeach to name but a few.

Elrington has proven himself as one the hardest-working artists currently on the Australian scene, and over the last 17 years since the inception of his career as an 18-year old in Adelaide, has released 9 albums and toured excessively throughout Australia, the United States, Canada, United Kingdom and New Zealand. Self-managed independent tours to the US have seen him grace stages of some of the most prestigious blues clubs in America, including Biscuits & Blues in San Francisco, JJ’s Blues in San Jose, The Cat Club on Hollwood’s Sunset Strip, Los Angeles, The Sand Dollar Blues Lounge in Las Vegas and Sullivan Hall in New York City.

After a jam-packed year of extensive touring throughout not only Australia, but also New Zealand, Nashville and China for the Concrete & Grass festival in Shanghai, opening for US rock legends The Doobie Brothers in front of a sold-out Tivoli Theatre in Brisbane, and also taking out the prestigious Singer/Songwriter of the year crown at the Australian Independent Music Awards in Sydney, Mike is very much looking forward to hitting the stage at the MBAS House Of Blues again.

“Everything about Mike Elrington’s performance is big – from the man’s physical frame, voice and guitar sound to the amount of heart and soul he injects into every show.” Australian Musician Magazine