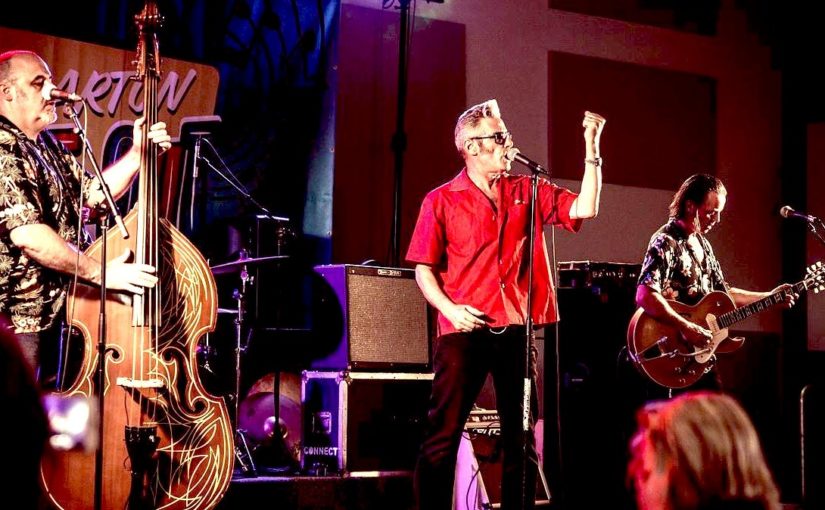 This Tuesday at MBAS ‘HOUSE OF BLUES’ @ FLEMINGTON BOWLS CLUB the feature act of the week is THE DETONATORS.

THE DETONATORS were formed in 1997 and after 21 years, with a couple of thousand gigs under their belt, exhibit no signs of slowing down. Based in Melbourne, this hard working quartet have never been afraid to hit the road, haul some kilometres and rack up a heap of shows nationally and internationally. A tight music unit with a finely honed repertoire of original songs, an entertaining stage show that only comes from years of gigging pubs, clubs and festivals, and an adoring, ever-growing following of fans, The Detonators are Australia’s crowned Jump-Blues kings!

Their original music, to which all members contribute, is best described as a lethal combination of Blues, Rockabilly and early Rock’n’Roll. “The Dets” band comprises acclaimed, star individuals who all hold their own musically – featuring bespectacled Rockbottom James on vocals and electric harmonica, Paulie Bignell on hollow-body guitar, Doghouse Dave on slapping double bass and Eddie Fury on sticks and skins.

With five CD releases in their arsenal, The Detonators have also had their music featured in the film “Charlie and Boots”, the Australian TV series “Underbelly” and American TV series “De Grassi High”. Cold Chisel labelled The Detonators as one of their favourite bands and have used them as support act for Chisel’s sold out Rod Laver Arena shows.

Dancing shoes, listening ears and drinking arms are compulsory for any good-time Detonators show – and they’ll keep you on your toes because you never know what Rockbottom James is going to do next!