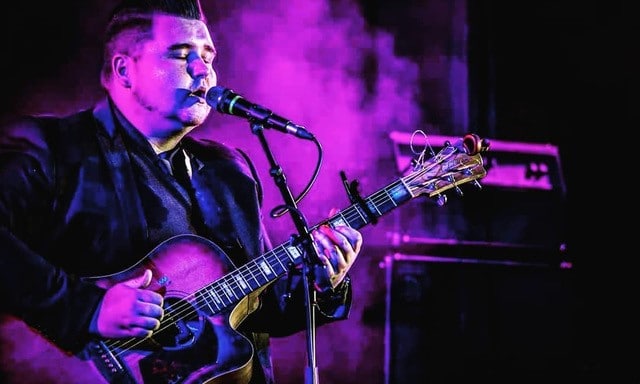 This Tuesday at MBAS ‘HOUSE OF BLUES’ @ FLEMINGTON BOWLS CLUB the feature act of the week is the BILL BARBER.

BILL BARBER, at just 21, is one of the most exciting young artists in the thriving Victorian Blues scene.

In 2012, Bill won the Melbourne Blues Appreciation Society (MBAS) “Youth In Blues” competition, resulting in him performing at festivals across Victoria. These included the Bendigo Blues & Roots Festival, and the End of the Line Festival. He has since gone on to perform at many more blues events and has acted a booker for youth stages at various festivals.

In March 2016, Bill released his first album, “Thanks For Your Consideration” accompanied by his first Victorian tour. Bill was the 2017 MBAS Solo/Duo Blues Performer of the Year, representing the MBAS at the International Blues Challenge in Memphis (USA) in January 2018.

Bill has also received an endorsement from Cole Clark Guitars, one of Australia’s leading guitar manufacturers.

“Bill Barber is the next in line to become one of Australia’s Blues greats” – Lloyd Spiegel.

This Sunday we’re holding a fundraiser to help get Bill Barber, winner of Melbourne Blues Appreciation Society Blues Performer of the year 2017, get to Memphis. There he will represent Melbourne at the International Blues Challenge (IBC) next January 2018.

It’s going to be a huge night of Blues with a number of artists playing including:

There will be a raffle on the night with a number of fantastic prizes, the doors will open at 4:30pm and we’ll have the kitchen open for you to enjoy the famous Blues Menu. As usual, the bar will be open so you can tuck into the huge selection of craft beers and ciders on offer.

You can purchase tickets on the door or pre-purchase on http://bit.ly/2yKorHv